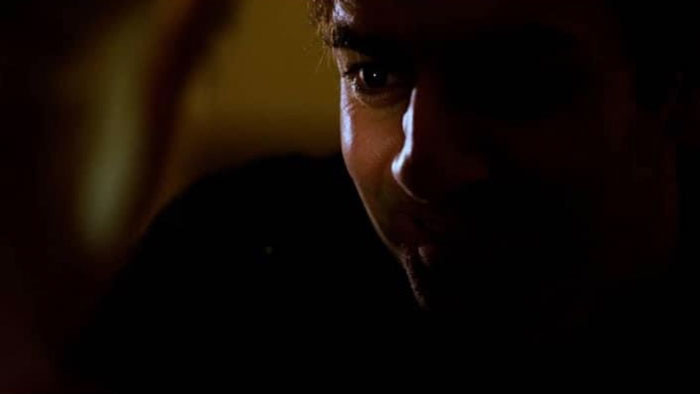 Some Visitors (2022)  Directed and Written by Paul Hibbard

It appears to be a gritty allegorical concentration on the worst of modern society in pathological mental decay, unabashedly emphasized with hyper-violence and exploiting the extreme limits of horror cinema. Paul Hibbard directed and wrote this demented short film that at first glance may fool you with the formulaic disguise of yet another ”Home Invasion” movie, however this vicious and unexpectedly twisty narrative explores that claustrophobic genre without settling for being just that. Some Visitors manages to reverberate disturbing questions that seem to penetrate with indirect reflections to the traumas of a society as if it were a candid mirror. The film follows a trajectory that challenges the idiosyncrasies of exploitation cinema, fluctuating in opposite directions at times, something that definitely leaves a symbolic nihilism to the deranged proximities of an increasingly frivolous sociocultural focus, where moral relativism seems to have more weight than a transparent judgment where we know how to discern right from wrong. In its short but effective minutes it manages to densify graphic violence that has a serious commitment in wanting to make its explicitness something gruesome, brutal and ruthless, there are no ostentatious camera movements that manipulate with superfluity the violent sequences, here it tenaciously seeks the compulsively delirious side of an act as horrifying and boisterous as watching a frenzied massacre with psychopaths with diffuse motives.

The script has a gratifying patience to establish the act of disrupting the sanctity of a private property; I personally found the immutability of the first few minutes vital to absorb the barbaric violence more energetically, each initial minute engendering a dreadful anticipation that stores up a considerable amount of the effects that will be unleashed a posteriori. The dynamic it has as a horror film is minimalist, in general the design is essentially simple, the only thing maximalist in the plot is the wrathful and relentless violence, but seen in its totality it always respects the parameters of a narrative that has enough awareness to understand what it can and cannot achieve, and the most skillful thing about it, is that it stays and exploits the former to the maximum and avoids the latter.

The writing makes use of narrative contrivances rarely found in drab big-budget horror films, and this well-balanced little production manifests its talent at the core of clichés by altering certain classic elements and making them fresh and purely expressing them with a delightful passion that vibrates with the unfettered enthusiasm of a horror film fan. The plot takes you into familiar territory, but what’s creative here is that it manages to draw substance from that familiar cinematic milieu; not much happens that is narratively hyperbolic, nor does it resort to the conventionality of playing stupidly redundant hide-and-seek (something used insufferably in films of this genre), the screenwriting austerely wants to penetrate into the most sensory and vulnerable territory. There are many shades of psychological realism that takes a threatening omnipresence in that scrupulous anticipation of which I wrote before, from the beginning with a rampant editing and a screen fragmented in two we observe a girl emotionally destabilized, demoralized, and fearful, deliberately leaving a functional secrecy in the characteristics of this character, everything here happens with productive purposes, which then become decipherable when we observe perplexed the development of the vile and pessimistic ending.

When interrupted in her elegiac night, this girl’s intimacy enters into a dangerous bewilderment, when a malicious guy chooses her for his perverse bloody games. The interplay between the two prior to the blood feast, reaches a dense confrontation of sick mentalities, creating a kind of bizarre debate between the acceptance of torment and the justification of their actions. The inflammatory violence escalates, gradually intrudes with the same evil impetuosity of the perpetuator, and when we least expect it we are already in some belligerent, noisy and enraged set pieces, which seems more like the set of a single great sequence that keeps nothing up its sleeves. Evidently, it is the scene where the film moves forward on premeditated autopilot, the visual excesses run through the same veins from which the blood of the characters flows, the chaos becomes an indulgent act to satiate the radical inclination of an audience that seeks these dark extremes. It is uproariously and wildly acted, yet there are moments of gut-wrenching tangible sensations that are conveyed in unusual minutes of unexpected introspection.

Some Visitors is a film that hypnotically invites you to watch it again, evocatively the second time around can intensify the effects and perspectives. It is controlled with the vehemence and visceral aggressiveness necessary to achieve that multi-interpretative effect. Director Paul Hibbard succeeds in making these lean minutes paradoxically thick and intriguing to dissect. 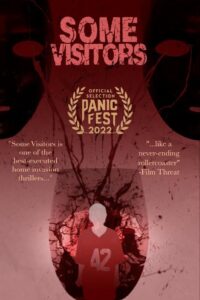 *You can see this film virtually or in person at Panic Fest 2022.