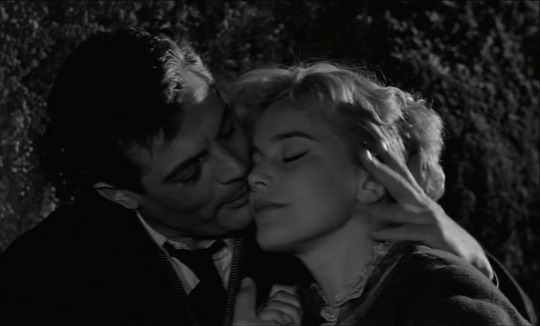 Who could have imagined that watching Marcello Mastroianni being friendzoned by Maria Schell for an entire film would be so profound and rhythmic, so heartfelt and exhilarating, so elegiac and melodious. White Nights is one of the finest art-cinema entertainments of the 1950s, a dynamic celebration of the ideals of love and its consubstantial existence with melancholy. Considered by many as Luchino Visconti’s best film that converges his two filmographic stages in an optimal stylistic homogenization, that of neorealism and that of his formal extravagance. Although from my perspective, and in order to give a renewed appreciation to this portentous 1957 film, I am more inclined to reformulate the obvious interpretation of its aesthetic and narrative facets, and give it a more structuralist reading.

In the neorealist films of the great Luchino Visconti one can amply note a cinematic evocation of the films of French poetic realism, cinematic works from which he learned a great deal, and consequently were, for much of his stay in France, the most important components in his cinematic education, just as they were the major influence on his political philosophy. To find an exclusive reason for the superlative appeal of White Nights comes from a very recognizable lyric, that of Jean Renoir. One, if not the foremost, of Visconti’s most influential cinematic mentors. Renoir was unquestionably one of his strongest influences, ideologically and stylistically.

The first thing I felt when I saw White Nights was a supernatural sensation of being in a subjective world, the atmosphere of feelings. A romance that evidently, Visconti, thanks to his sensibilities as an artist, has managed to establish into something easily identifiable, a hallmark of his auteurism. The visual poetry of White Nights is authentic, yet the relationship of narrative and form is reminiscent of Jean Renoir. This of course is no mere coincidence, Visconti was an assistant on one of Renoir’s finest masterpieces, Partie de Campagne (1936). Certainly, only after the maestro Renoir, Luchino Visconti is the most adept at making a romantic tragedy extraordinarily beautiful, and the most qualified to handle two different dimensions as if they were one. In White Nights he pronounces with great solemnity that quality that deciphers the nuances of the masterful short story on which it is based, written by Fyodor Dostoevsky. Visconti resolves the literary with wondrous cinematographic excellence, in what is inarguably his lightest film, and the one that contains the most effervescent romance of his oeuvre.

Felicity and vigorous humor is the primary language within the storytelling of this film. However, the subtext of the dramatic interactions, and the expressive verbalization of their performances, are in a state of reciprocity with despondency. At times, the narrative explores the sensual comedy that lies between the ordinary phases of a flirtation, but at others it emphasizes the melancholy of unattainable romantic desires. The tragedy of White Nights is not that of isolation, or of bad luck in love, it is that of wanting or forcing the impossible; an ideal as human as it is naïve, which I believe is inherent in our species.

Immersing yourself in this romantic story is one of its sweetest pleasures. The fluctuating plot makes interchangeable the agony of the spurious hopes of a romantic correspondence with the desperate passion of being in love with an ideal rather than a descriptively real fact. The fickle depression generated by love being overlaid with the brutality of illusion. Maybe every word I’m using to symbolize the profusion of dizzying emotions on display in this film will make you think it’s a saccharine melodrama, or that it’s the archetypal maudlin tragedy. If you already thought that, I must tell you with a categorical no, that White Nights is too special to fall into the traps of populist cliché; Luchino Visconti triumphantly captures the power of Dostoyevsky’s short story and interprets it in his own way. Spectacularly melodramatic yes, but with the artistic parameters that someone of Visconti’s caliber always delivers.

As expected from the Marxist aristocratic Italian filmmaker, his cinematic approach to Dostoevsky’s literature is much more political and bombastic in its sense of romantic spectacle. The magical filmic architecture of this film, changes the location of the dramatic events from the historical enormity of St. Petersburg to the nocturnal serenity of Livorno, where the lonely, humble and sympathetic Mario meets an angelic woman, Natalia, with whom he shares certain emotional similarities, both equally solitary and with a voracious need for companionship. Mario, the more idealistic of the two, falls in love with her at first sight when he sees her desolate, drowning her sorrows in a tearful bath during the placid night. The volatile and introverted Natalia does not respond with the same sympathy with which Mario sweetly approached her. However, her sentimental bipolarity, between jovial smiles and unpredictable cries, gradually connects with Mario’s bouncy optimism, but only in a friendly tone, never in an intimate and affectionate behavior.

The great mystery of this love story is as indecisive as its blonde and fragile female character, the setting of this drama is wrapped in an aura of secrecy that intensely absorbs our curiosity to understand Natalia’s capricious, but valid, sentimental pain. We as the audience only follow, most of the time, the male perspective, that of Mario, who also wishes to discover the origin of the crystalline emotional state in which Natalia finds herself. If you know the story, then you know what I’m talking about, likewise if you saw this delightful movie. And if you didn’t, then the truth is that I consider it a relish to experience the development of the plot without knowing anything, it works like an enchantment, once inside you are part of that world and its melodramatic conditions.

I don’t know if I’m exaggerating or just my Visconti fanaticism is speaking for me, but White Nights contains the most enigmatic monochrome cinematography I’ve seen in 1950s cinema. It’s not that it’s simply exquisite, it’s that it has modified my conception of what is photographically possible in a black and white film; it revalidates black and white cinematography in a predominantly colorful decade, and explores its most delicate endowments, in sublime textures that energize the visual storytelling. Visconti’s refined taste together with the immaculate eye of cinematographer Giuseppe Rotunno orchestrate a nocturnal poetry with shadows and optical filters that transform the studio shooting into a haunted Livorno, a port city haunted with the sorrowful spirits of impossible or platonic loves, artificial and true. As a midpoint between the two aesthetic spectrums of his film career, Visconti amalgamates with bold gusto and dramatic flamboyance the palpable realism that is contradictorily made in an artificial environment with the exaltation of novelistic events in a formidable mise-en-scène that is infectious from start to finish.

Mastroianni and Schell play a transcendent role in the limpid narrative structure of this film, suggesting that they are the most atypical characters in Visconti’s universe. Maria Schell, in one of her moodiest, most chaotically emotional performances, plays the dulcet Natalia with a vocal mellifluousness in tandem with a shifting facial and body gestures that manifest the comic, as well as elegiac, depth of the failed romance in White Nights. As for Mastroianni’s performance, playing the buoyant Mario, I would say that he is the actor who perfectly graduates the rhythm of the dramatic dynamic, not only discerning very well the special and complex moments from the common and simple ones, but also, with complete affability and understanding, playing the loser and lonely man with an empathy that brims with human generosity, an idealistic man of the working class who looks for hope in love and leaves us a very formative lesson, essential for the human character, and that is, to appreciate the ephemeral moments of happiness that are rapidly blown away by the wind, to value them because there is no happiness that is everlasting. Mario is the heroic loser who is more assimilated to reality, to our failures and our achievements. And last but not least, the sculptural Jean Marais, as the amorous antagonist, also does his thing in sequences that are unforgettable for the sheer enjoyment they generate in their acting and visual fluidity. Visconti builds a romantic triangle with these actors that resonates with both politics and sexuality, cinema and poetry.

Perhaps the operatic tendencies connatural to Visconti’s oeuvre, as is readily apparent in the hyper-stylized Senso (1954), here do not have the pictorial and enthralling splendor as in his color-filmed masterworks, yet the sense of hyperbolic spectacle remains vital in an essence that is more acting and narrative than photographic. Visually it is one of the most mind-bogglingly gorgeous pieces of cinema, though simultaneously unostentatious, something that patently seems an anomaly coming from a director so vainglorious of his formal display. This ceremonious calm and organic kineticism that generates the aesthetic design of White Nights, to render sequences of pure melodrama in a rich mixture of theatricality and cinema, naturally conjures up neorealist sensations; but added to this, the literary weight with the invigorating language of histrionic sentiments found in this intoxicating story resonates in unison with the mythic eccentricity of that novelistic candor that epitomized the second, and best, stage of this fabulous Italian filmmaker, a facet to which this film could belong as much as to his initial stage. It is a confluence of the very best of Visconti’s filmmaking.

Ultimately, what the tragic, jocular, weepy energy leaves you with is that of the power of cinema. It’s not the masterpiece that reverberates rapturously for its perfection and idiosyncrasies, but it is a great quasi-masterpiece (if there is such a thing) that intoxicates you with love without being cloying and drenches you in art without fear of being heavy-handed. It’s the balance that makes White Nights a delectable experience; though I prefer the philosophical and complex Visconti, I must admit that this film has slowly grown on me in an inexpressible way. The affection I have for this story is as amicable as it is personal; watching the final minutes of this unexpected heartbreaker reminds me how happiness and sadness are indivisible. 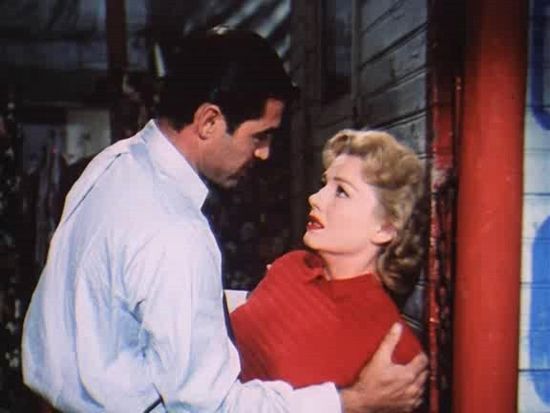