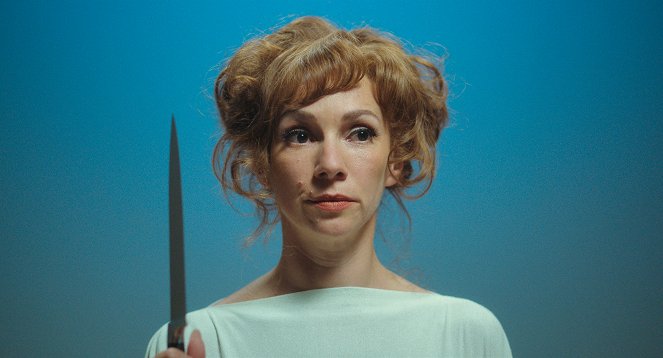 To what extent can the willfully bizarre, grotesque and provocative be considered extraordinary art in the already boundless idiosyncrasies of the unconventional? Functionally, this new epicurean feast directed and written by one of the most unusual and abstract contemporary artists, Peter Strickland, can comfortably theorize that somewhat tricky question with such solid foundations that one can examine its lurid philosophy as if it were an imperfect, if brilliant, rebellious thesis.

Flux Gourmet promises nothing intellectually groundbreaking, yet its caustic flavor, refulgent volumes and pungent textures have the voluminous capacity to swell a glutton’s stomach and incentivize a neuronal over-stimulation that hypertrophies the cerebral depths of this scathing film. Today more than ever, controversy as a discursive or disruptive instrument seems to have established itself as a fashion, a subversive whim; it is no longer an articulation with socially acerbic inclinations, nor is it a brazen filmic discourse that alters sociocultural norms or seeks to shock and mock the status quo, it is intended to seek scandal without rationale, just for the sheer enjoyment of igniting controversy. We could be in front of a neologism, something like a renovating school of thought, “provocatism”. However, once categorized the vanity of incitement through art without exact or substantial purposes, it would leave the artist provocateur in a futile and ambivalent state; for what really makes a work of art to be considered art? Even more so when it pretends to contradict any canonical method.

The philosopher Richard Wollheim said of that quest to decipher the global mystery of art, that it is “one of the most elusive traditional problems of human culture”. But what exactly is the link between all this argument and the stylized hilarity and deep abstraction of this appetizing film? Well, let’s put it down as just a tasty appetizer, for as one becomes fully immersed in the culinary extravaganzas of this maddening and mind-bending world, the answers to the questions arise of their own accord. Flux Gourmet is a pitch-black comedy that never reveals 100 percent of its gustatory intentions, in effect, contextual and thematic secrecy emboldens the exploitative absurdity making its occultism its most proficient device to intoxicate our thoughts, thus transforming its peculiarities into a tasty yet uncompromising debate. The overblown cinematic extravagance, the bad taste as the new attraction and the egocentric confrontation are part of a deformed and avant-garde structural system that does not attempt to specify but to self-criticize provocative art at the expense of a holistic response to art.

Extracting warped and unsettling sounds from food to transmit pleasurable stimuli is the new sophisticated cuisine in this unhinged narrative. Like a rowdy, groovy rock band, the culinary collective of three outrageous artists turn their stage of sonic electricity into an act of rebelliousness, theatrical vulgarity and licentious voluptuousness, carnal and alimentary, all smartly radical; with the sole dramatic distinction that their audience is the classy elite, the extravagant realm, and people with a penchant for the grotesque. Perhaps we are inside an otherworldly dimension where the anti-thesis to the conventions of the aesthetically appealing is the new poetics. This adventurous cordon bleu triumvirate are the residents of an artistic institution where they make one-of-a-kind hyperbolic performances, an exquisite mixture of inextricable beauty and grossness.

Our perspective of each ceremonial act of this collectivity becomes progressively immersive thanks to the multiform configuration of the narration, narrated mainly by an introverted writer who documents the unorthodox habits of the people who gather at this glitzy institute. This peculiar and observant character, played with brutal deadpan humor by Makis Papadimitriou, takes journalistic notes as if he were studying the modus vivendi of a new species, an anthropological study. Peter Strickland’s attention-grabbing direction does not veer off course, and never alternates points of view, therefore we are perplexed, aghast, mesmerized and dazed by the same dreary reality of the writer who observes even the smallest, most intimate details of what unfolds in that “pornographic” manipulation of food with sounds and body.

The heady path this film takes to confront this, is surely acidic and nonsensical, yet the rejoicing is maximalist to the extreme that it oversteps the boundaries of logic and reinforces an irrationality that we accept for what it is. Nothing in the eccentricity of this production is microscopic, everything is seen on the scale of a colossal unreality. Our sheepish narrator and the one who makes this story more than just sensationalistic, during his sojourn in this splendid institute confesses, as if it were a sin, to the turgid and cynical doctor (also one of the institute’s residents) that he suffers from intractable flatulence that makes it impossible for him to lead a normal life. The gastrointestinal distress of this character enters into an all too precise harmony with the romance of the abnormality of the culinary collective, gradually entering this group that he would prefer to objectify them as a cult.

In the vainglorious and surreal weirdness of this film, certain patterns are set that are just as disconcerting as the showy magnetism of the narrative. The emphatic proclivity for the ritualistic, in the rhythmic continuity of a routine rhyme, makes the experience with these picturesque characters something architecturally beautiful; though, to penetrate their cyclical enigmas, and their placid and inevitable philosophical languor, one must have a connective perspicacity, a predisposition to want to be part of the pantomimic periodicity of act after act. The symmetrical ornamentation of the staging and the methodical construction of each repetitive step unavoidably prolongs the plot with strenuous diligence, yet this arcane, esoteric and singular dynamic is enhanced by a captivating formal exuberance that is impossible not to venerate from plural artistic layers. In Flux Gourmet there is a vast interactive space, where its primary themes are diversified within this stylish but opaque institute. We are like voyeuristic judges examining a reality show, but without ever losing its eccentricity. Watching a bombastic Gwendoline Christie and a punkishly awkward Asa Butterfield, playing two of the most authentically kooky and campy characters in the plot, is a small sample of that perennial eccentricity.

The orgasmic cocktail of auditory, visual and emotional depravity is ambiguous but visceral, and at the end of all this spectacle of the grotesque, perhaps Flux Gourmet has not answered with sincerity anything of what it proposed in its philosophy on art and the issues that revolve around it, but what it does address with mordant aggressivenesss is the critical self-expression to what we call art of the transgressive. Here a painful colonoscopy can look as formidable and beautiful as the compositional golden ratio of the most magnificent paintings hanging in a museum. Zero sarcasm. Flux Gourmet divulges certain indiscreet imperfections of a deliberate provocation, and we, the audience, make of those imperfections a perfection of art.