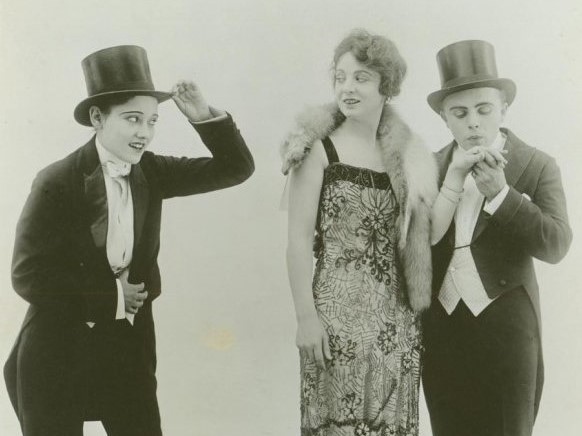 Most of the American silent films of the 1910’s were melodramas or comedies, a large percentage of which were two-reel comedies, an accelerated and amusing form of entertainment in cinema that laid the foundations that would constitute the American comedies of the 1920’s. Keystone studios, probably the most famous and pioneer producer of this comic format was a creative humorous film machine, which prospered thanks to its indisputable ingenuity and its expeditious way of making movies, founded in 1912 by Mack Senett, this film production company was home to none other than the most influential figures in the history of cinema during the beginning of their careers, a 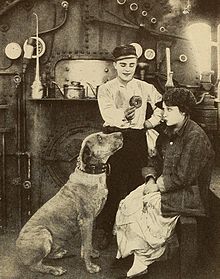 mong them Charlie Chaplin, Harry Langdon and Harold Lloyd. This time I bring you three two-reel comedies starring the glorious duo of Gloria Swanson and Bobby Vernon and produced by Keystone Studios, three of the many productions they had together, many of which are lost, inaccessible or badly damaged.

It’s not extremely witty as it pretends to be, nor does it contain slapstick farcical enough to reach the effervescence of the performances, yet there is something unabashedly anarchic and tantalizing in its subversive maneuver of compacting something so daring into the slimness of a two-reel film that makes this snappy comedy from Keystone Studios one of the best productions featuring the charismatic duo of Gloria Swanson and Bobby Vernon. The convoluted and unnecessarily complicated display of many characters in such a rushed and ecstatic plot makes it impossible to have optimal order in its rambunctious storytelling, and consequently difficult to understand what the hell is going on in that fleeting narrative configuration. Yet none of that is relevant for many reasons, the performances are magnetic and functional by the standards of its typical 1910’s comic format, thus delivering in an elemental but amusing way, a continuity of awkward gags, which despite not being authentically hilarious, the performances put a rhythmic zest to the humorous mayhem by consistently operating with an infectious sense of physical comedy. The Danger Girl entangles the uncontrollably horny hormones of several silly men, one of them played by Bobby Vernon, who fight over a shallow, seductive and deceitful woman who really turns out to be a clever vamp. The sweet and bold Gloria Swanson plays the ‘madcap’ sister of one of the male characters, a girl in love who decides to disguise herself as a man in order to reveal to her brother and the man she likes that the mysterious woman who hypnotizes them with her charms is just playing with them. Seeing a confident and empowered Gloria Swanson in a man’s suit is the most celebrated thing about this two-reel comedy, and for obvious reasons, the most provocative action it has for the sexual politics of the puritanical morality that still persisted in early 20th century society. The Danger Girl is one of those special and remarkable short films that one rediscovers in contemporary times and is struck by how powerfully modern and filmically adventurous it is. Watching the glamorous Swanson so flirtatious with both sexes is not only intensely entertaining, it’s downright revolutionary.

Clarence G. Badger’s rip-roaring two-reel comedy with the fabulous acting duo of Gloria Swanson and Bobby Vernon is the most uneven of their exciting film collaborations that took place in the influential era of Keystone Studios, when it became an autonomous production unit of the Triangle Film Corporation. In this film the winsome young Gloria, played with spectacular excitement by Gloria Swanson, inflames the passions of a flamboyant sultan in a dazed and artificial India leading to his desires to make her part of his harem and ultimately holding her against her will, Gloria’s gallant suitor, played by Bobby Vernon, also finds himself trapped under the sultan’s madness, both plot their escape with the most improbable ideas you can imagine. The humor quickly evaporates at the same pace as the madcap two-reeler’s fast-paced format, and not even the beautiful juvenile grace of a fantastic Gloria Swanson can save the histrionic hyperactivity of this short film. Nevertheless, visually there are discernible qualities that stand out not in its over-the-top comedy setups, but in the cinematic appeal seen within the framing, such as constant shifts in the z-axis of the mise-en-scene and superlative attention by the actors to deftly read the dimensions of the shots and angles in general to move within it in the correct proportions. I’m convinced that most of the errors stem solely from the uncontrollable energy and lack of diligence in balancing that impetuosity, though also, because of the suggestive eroticism in the content there are a few seconds or perhaps minutes that were truncated by the conservative censorship inherent in the 1910’s. But even so, the racy, voluptuous provocation is protruding no matter how much cutting was done in the editing room. The amusement is ephemeral in this film, but Gloria Swanson is undeniably extraordinary as always.

I’m not entirely sure if it was a fortuitous or a cleverly intended result, but this compulsively hilarious two-reeler defies its own rapid-fire aggressiveness of the abrupt and irrational comedy format of the silent period in the 1910s. There is not a single minute where its loony content is spatially and temporally subjected to the hasty structure of its slim duration; unexpectedly and unusually, in that accelerated configuration of humorously concise filmmaking it has the audacity to give wonderful pauses and a uniformity of narrative that unhesitatingly compels me to say that it is my favorite two-reeler starring the high-spirited duo of Gloria Swanson and Bobby Vernon. Teddy at the throttle is one of the funniest comedies produced by the two-reel experts, the pioneering and creative Keystone studios founded by Mack Sennet. Directed with impeccable vivacity by the underrated Clarence G. Badger, this delirious romantic comedy presents a story of absurd passionate schemes, in which different couples intertwine, some seeking an economic objective with marital advantage and inheritance, and others looking for true love without monetary benefits. An idealistic Gloria Swanson plays a girl in love with the giggly, hyperactive Bobbie, played by Bobby Vernon, the two have an honest, requited love, however in that integrity, the romantic girl’s deceitful and ambitious guardian, played by Wallace Beery, is also in charge of the easily manipulated Bobbie’s inheritance. This dishonest man devises a plan to get his seductive sister to marry Bobbie in order to obtain that substantial inheritance. Like any great comedy of the 1910’s, nothing makes the slightest sense, the events are built on illogical silliness and the gags are the only thing that ultimately give it a spirit of free entertainment that will be tremendously influential for the future. Nevertheless, this short film proudly exhibits a ridiculous gala of cinematic experimentation that subverts its own nature, especially for its agile attention to every microscopic detail of its comedy, something that is usually peripheral in this hectic format. The film benefits gigantically from ending on its best notes, a cadence of set pieces that would make Buster Keaton and Charlie Chaplin blush for how elegantly flawless they are; one in the middle of a stormy sequence drenching the characters in an irrepressible rain of biblical proportions and another, which takes place in the final minutes, a splendid orchestration of cross-cuts in which we see the celebrated dog actor, the great Teddy, in a heroic act saving the damsel in distress who is tied to the rails of a train about to be crushed. It happens too much to be a modest two-reeler, it’s the kind of short film worthy of being a feature, it’s so cheeky and daring that it even drops a dramatic twist in the middle of its short 20 minutes. And as a bonus, it features Bobby Vernon’s most endearingly lighthearted performance.