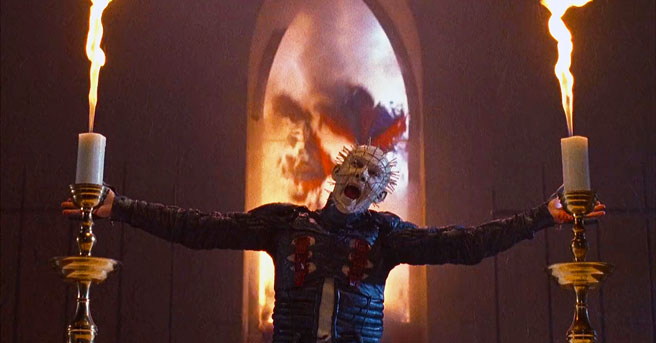 Long gone are the hedonistic lust and twisted sadomasochistic pleasures that pretended with authentic ambition to philosophize with bizarre imagery and hyperbolic surrealism the cosmological fantasies between hell and earth, now with this third installment, Hellraiser is nothing more than an unintentional joke satirized with all the ugliness of this new precipitous  way of making a shallow sequel that paradigmatically looks, sounds and feels like the worst of 90’s horror cinema. Hellraiser 3: Hell on Earth promises two things: first, to state openly that it is a far cry from the hellish extravaganza of its two predecessors, and second, that it empirically learned nothing from some of the institutionalized mistakes of sequel making in the medium and thus surpasses itself in stupidity and mechanical imperfections; both promises it not only fulfills, it makes them ubiquitous in their execution.

There are worse sequels, there are even worse horror films than Hell on Earth, yet this is justifiably one of the most magnificently inept sequels ever made. Indeed, it is a daringly funny film, as having the task of finding a single compositional, narrative or structural element that saves it from being just mindless horror is completely impossible; numbering the ineffective actions of this production is a hilarious exercise that in my perspective makes it a passable trashy movie for a good time ruining your eyesight and your brain with its plurality of idiocies.

To this point, Hellraiser 3: Hell on Earth is the worst directed. Anthony Hickox directs this third installment exposing his tremendous lack of criteria to compose a story, but he is not only the major author of this crime, he is also accompanied by a mediocre writing and an anemic cinematography by Gerry Lively. These are the three thin and fragile pillars that pretend to sustain a sequel that never intends to maintain with vital signs the esoteric forcefulness of its literary genesis that was solidly conceived in the first two films.

Hell on Earth is overflowing with painfully bad performances and such desperately awful narrative development that it’s practically like watching a movie in free fall with nothing to rescue it from its own debacle. While not a financial fiasco, this production is still a cinematic fiasco by any standard. In its primary concept to bring “life” to the plot it has an interesting dichotomy, starting by articulating the same familiar dynamic as its two ascendants, i.e. starting the drama with some non-human form that cries out for blood in order to evolve into an autonomous physical form.

In this case, being another sequel that continues on the basis of the last film’s ending, that entity trapped in a multiform sculpture is Pinhead played by the great Doug Bradley, more villainous than ever and spectacularly loquacious. With skillful persuasion the leader of the cenobites cajoles the self-centered and womanizing J. P. Monroe, who falls under the hypnotizing voice of Pinhead serving him in his favor. This strapping, toxic character is played obnoxiously badly by a Kevin Bernhardt who looks like he’s straight out of a sleazy 90’s porn commercial. Following the thorny, and erroneous, form of narration, on the other hand we have a young reporter played by Terry Farrell, who, determined to have a juicy news story, investigates everything about the cryptology of that sinister puzzle box that opens portals to the underworld. In all honesty, I actually consider the haphazard stylization of its narrative to have some potential, at least from the satirical perspective of its blatant indecency and penchant for being a dark, tawdry comedy. But unfortunately to pull off a hybrid balanced in sweaty campy essence and exploitative horror requires filmmakers with that same racy attitude and solid commitment to being provocative. Hell on Earth is just vulgar, vacuous and anti-aesthetic.

For some unfathomable reason, Anthony Hickox’s sloppy direction has an arbitrary need to materialize in-depth staging and deep focus compositional designs with an absurdity and geometric ugliness that simply makes Hellraiser 3 an abusively horrendous film to watch, coupled with oblique angles that are invasive and irrelevant to the narrative situation.

This film is illiterate in visual storytelling and boy, does it show it in every frustrating minute of its running time. However, admittedly, there are two things that are unequivocally entertaining despite all the garbage that surrounds this film, and that is that even though Pinhead is no longer the scary character portrayed in the films prior to this one, seeing his tough-guy, flexible side spouting monologues about hell, death and the philosophy of suffering as if he were a celebrated academic is gratuitously funny and of course how can we forget that this is the film where Pinhead has his memorable Carrie-esque massacre moment. Plus, the fact that the end credits feature Motörhead‘s music makes me want to forgive this film its previous horrendous crime.