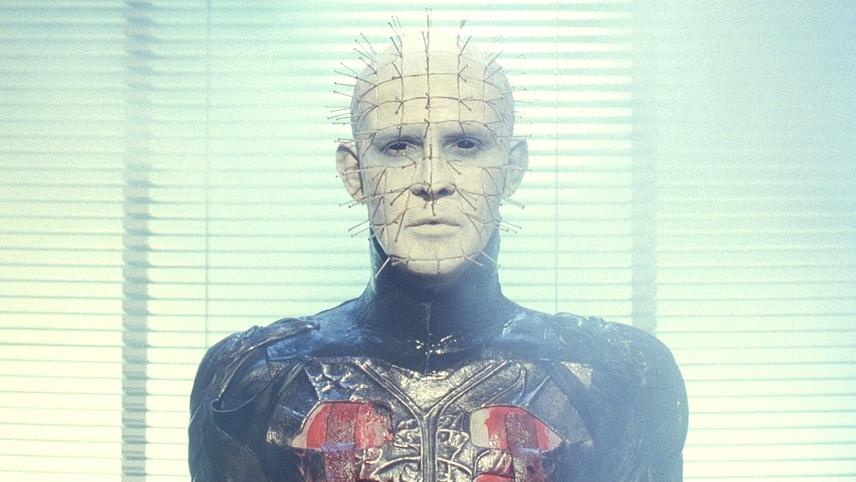 Attempting to even measure its high level of originality as an 80’s film made during the years when horror cinema was already showing a notorious rustiness is virtually impossible, not only because it would be an astronomically huge if not incalculable measurement, but because it is objectively the most authentic horror film of the late 80’s in literary essence and infernal iconography, period.

The multifaceted and extraordinarily creative man behind this story that has been etched into the most emblematic of hell representations in the medium, directs and adapts his own novel called The Hellbound Heart taking as primary bases the most flagrantly outrageous in grossness and esoteric surrealism contained in his creepily perverse novelistic writing to transpose it to the big screen with a flawed, yet undeniably admirable, cinematic configuration that while tenuous and erratic in narrative, the same cannot be said of its romantic sadomasochistic imagery, which is enigmatic in its occultism and deliriously gory in its boundless indecency, perpetually inventive.

Clive Barker as the great visual artist that he is, manages to erect a provocative hell in the tactility of everyday reality without fear of exceeding the limits of gore farce, and thanks to his stylized way of writing gives all the descriptive qualities to this nightmarish scenario where it seems indistinguishable between earth and hell. Praising the ingenious writing style as well as the ungodly atmosphere of its images is easy, however I would have liked that quasi-avant-garde insubordination and pure terror to be accompanied by a symmetrical and rhythmic narration when all that fleshy depravity and lyrical torture enters into its glorious action. Hellraiser is a colossal narrative mess, with no structure and no dramatic proportions to match a storytelling system that actually attempts to put all its pieces together to articulate a story as robust as its material is.

These are glaring flaws, which oddly and ironically I have learned to enjoy more and more when watching this film. Hellraiser is an indelible mark of modern horror cinema, and that will never change no matter how many more imperfections I discover in it; the one thing I always know that sticks with me when watching this film is the audacity of its objectives, the eloquence of its otherworldly demonology and the splendid experimentalism of its unholy  architecture.

If in order to enjoy Hellraiser I must set aside its sterile editing, lackadaisical act transitions, uneven performances and fluffy direction to focus only on the dark hedonism and visceral effects it establishes in the visuals, then I am willing to succumb to that heteroclite form of filmmaking with no problem. Because let’s be honest, if this film literally is fascinated with pleasures within brutal paraphilias to craft an intricate sadistic philosophy and only that, then I guess exclusively for horror fans it is indeed pure indulgence. And of course it is. It’s like the perfect cinematic mosaic, replete with images that follow a geometrically continuous pattern of idiosyncratic horror with no sense of plot where the only thing that has significant preeminence is the wild display of practical effects, occult symbology and characters that function as instruments to make this visual spectacle vibrate.

Frank Cotton played by Sean Chapman, a sadomasochist par excellence in search of experiences of unlimited pleasure to satiate his monstrous abnormal sexual appetites, manages to buy a small puzzle box that when you succeed in deciphering its mystery by manipulating it correctly opens a portal out of this world, a place where the extremes of your desires go as far as death. After apparently disappearing for a long time, his brother Larry played by Andrew Robinson, decides to move into the house where Frank lived, along with his wife Julia played by Clare Higgins, they settle there despite the filth and precarious state in which Frank left it. While living in that squalid house and progressively restoring it, the melancholic and mercurial Julia comes across the shocking surprise that Frank is actually still living there, not in his human form, but in a cadaverous appearance that was revived thanks to some drops of blood fallen on the floor. That is only the beginning of a macabre collaboration, and a past love affair between Frank and Julia that they seek to consummate again, no matter how many murders must be carried out for Frank to become flesh and blood again.

What’s most deliciously malevolent about Hellraiser’s ethereal setting is how the performances, which range from rueful to masterful, capture the twisted mystery of their surroundings with maximum intensity. Clare Higgins is aggressively sleazy and incorrigible as the wanton Julia; and though her hyper-reactive histrionics may not always be ideal for the serious brutality of the drama, it makes her a fickle but essential character in the extemporaneous humor born in the film. Ashley Laurence plays Kirsty, Larry’s daughter and Julia’s stepdaughter, a character who certainly suffers from a cumbersome superfluity but is nonetheless the typical character needed to reach an entertaining and forceful dramatic climax. Even more entertaining when we see how dissimilar Julia and Kirsty are as characters, diametrically opposed between evil and good. Though, as everyone well knows, axiomatically, the one that stands out imposingly and tenaciously is Doug Bradley’s minimalist performance playing the icy and iconic Pinhead as the leader of the Cenobites, demons to some, angels to others. There is something so memorable about his sternness in resonating each pithy but effective dialogue that he vocalizes with a booming energy while his rigid face accentuates his morbid enthusiasm. Each element of the characters, forming an aesthetic uniformity in their lusciously fatalistic design, magnifies Clive Barker’s vision in the medium, not compactly, but convincingly in its decadent labyrinth.

Hellraiser is like the equivalent of taking the literary overtones of Marquis de Sade to fantastic levels, extreme violence and degenerate sexuality that transcend the limits of what is possible. Perhaps not having had the chance to explore the sexual deviations contained tightly in the novel The Hellbound Heart in depth and without any censorship, this film would definitely have been just as feverishly bizarre and hellish but with a more substantial narrative development and with its priorities in order.

There are too many religious innuendos, sharp suggestiveness and symbolic complexities that become peripheral because of this production’s erroneous choices. “But who am I trying to kid,” it’s still Hell fucking raiser and has phenomenal creativity that conceives a cinematic visual field that draws you into terrifying butchery, dreamy hellscapes, and terrific non compos mentis characters. Great stuff.