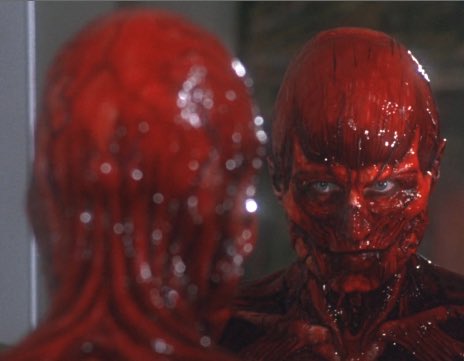 As a sequel to a film as original and heterodox as Hellraiser (1987) it does all the right things as well as all the wrong things. For better or worse, the result is basically Hellraiser on steroids; and for all its uncompromising contradictions it manages to produce something blazingly exploitative, without the philosophical qualities and uncanny decadence of its predecessor, Hellbound: Hellraiser 2 is vehemently devoted to fashioning a kind of preternatural tour of a labyrinthine hell where it composes a macabre ode to the grotesquerie of its deformed passages.

Traditionally it could be said that it elaborates a rather trite system of consequences, especially in its recycled and useless first acts, which are only dedicated to summarize the plot of the first film to be able to start its continuation, however this time unlike Hellraiser (1987) this production has well-founded and unified objectives to know where they want to take the plot and how they want to materialize it. As a consequence of this premeditated productive organization, the viciously eccentric content comes aggressively fast, and simply does not stop, triggering a series of sequences that lead us to be persuaded that Hellbound: Hellraiser 2 is indomitable in its extremism, basing all its narrative mechanisms in an ostentatious glorification of the ludicrously explicit.

This sequel does not believe in the nuances of its precursor, nor does it believe in its seductive symbolism or the subtlety of its complexities, this bloodthirsty sequel has as its ideals only the depravity within its surreal scenario and explores it without discretion, it wants to be dirtier than Hellraiser (1987) and energetically achieves it. The film’s absolute commitment to gratuitously exalting violence is a sort of delectation that automatically rubs off on that particular audience molded to perfection for this style of genre.

Hellbound: Hellraiser 2 directed by Tony Randel takes a huge step forward in directional comparisons, this is a film that knows what it wants to extract from its compositions and its morbid rejoicing; Tony Randel’s baroque direction brings Clive Barker’s story palpably to life and with sophisticated hellish ornamentation, I think, has a better idea of how to cinematically transfer the literary textures of Barker’s writing. Not only does it flow with better form, but the filmmakers here astutely grasp how to use the filmic field to exacerbate the provocations and how to give a serpentine kinetics to the convoluted conception of Barkeresque philosophy.

Certainly, the film can be misjudged for its exploitative frivolity, or similarly it can be interpreted as a bastardization of Hellraiser’s complex subject matter, yet there is as much truth as falsehood in that conjecture for many reasons. It is true that this sequel opts for the blatantly violent and smutty without any significant value, yet that only occurs in its eye-popping levels of bloody hostility, in reality there is a great depth of scenic detail in every minute of its running time; which while not making it an ingenious film in drama or storytelling, makes it absorbingly beautiful (of course, depending on what you consider beautiful). It is intensely graphic, this sequel is perversely edited with a cutting system reminiscent of Italian exploitation films that instead of subtly subduing the rough gore with incisions that seek to balance the violence, what it does is magnify it with cuts that only seek to make it more explicit than it already is.

The plot begins at the end of Hellraiser (1987), Ashley Laurence reprises the role of Kirsty, now committed to a psychiatric hospital while the police investigate the horrific events that took place in the house of his father, now dead. The conniving Dr. Channard, played with superb camp energy by Kenneth Cranham, upon hearing Kirsty’s “delirious” supernatural stories, manages to put together the key pieces to prove his obsessive theories and his long search for the enigmas contained in that puzzle cube capable of opening portals to other dimensions. His ambition and imperious search for unimaginable pleasures lead him to revive the perfidious and lustful Julia, played again by a fantastic Clare Higgins, and then to enter the intricate infernal world that the esoteric box can give him.

The plot, at least for the initial acts are a clumsy copy of the tense and dark development of the first film, the only difference is that now Julia is the one who needs to regain her human form. With incongruities and specious pathos, this seems to be the sequel that notoriously takes it upon itself to elevate the secondary status of the leader of the cenobites to protagonist proportions. There is a very bizarre function in pursuing a sensitive characterization of that chillingly sadistic character, I’m not quite sure if it was a purely constructive purpose in its narrative or an inconsequential ingredient to open the door to the excessive proliferation of sequels that spawned after this one. Whatever the purpose, it is obvious that its popularity is meritorious, Doug Bradley embodies the character with exceptional strength and thus immortalizes one of the most aesthetically famous characters in the history of horror films.

Conversely, if Hellraiser (1987) gave more weight to its characters and their compulsive degenerations, then it was almost a given that Hellbound: Hellraiser 2 would focus on exploring its surroundings and not give much importance to its characters. The physicality of the immense inferno that this production portrays, comes from many creative influences that reinforce the ambiguity of its setting, an abstract hell clearly. The design with which they build every corner of this treacherous and cosmic hell, has a refined amount of details that evokes in style as if we were watching a fresco painting, luminous and volumetric, dark at times and bluish at others. But the best thing about its structure is how the quirky narrative takes on considerable weight once we are inside this hyper-stylized world of suffering souls condemned in their own sins. As I said at the beginning, it’s like a tour through the unpredictable paths of hell, which gradually expands and we explore it with wonder; the writing chooses to give a sort of diagrammatic representation of hell, where we slowly get to know all its sections and descend deeper and deeper into its Dantesque depths.

It is the most blisteringly violent, explosively indecorous and gleefully sadistic. Not necessarily because of those factors is it my favorite Hellraiser film, but it certainly has something to do with that. Whenever I return to its cruel, atmospheric imagery, I forget that there are scenes* so lurid and gory that I’m reminded why it works as a kaleidoscope of exploitative and interestingly singular ideas that converge into something special.

*(In particular, the scene in which a mental hospital patient suffering from delusional parasitosis begins to rampantly cut his body is extraordinarily brutal).