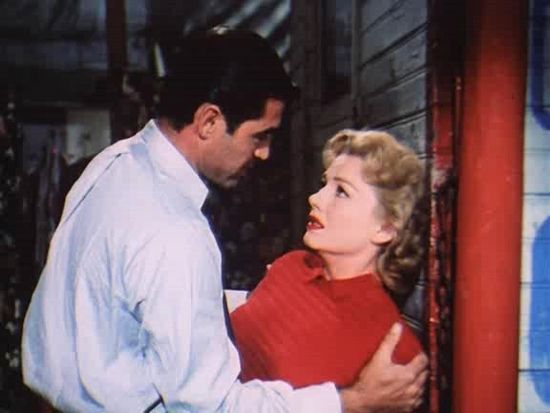 Raunchy and contrived, and vaguely beguiling when you get carried away by its capricious interchangeability of narrative styles, between the melodramatically lurid and the comically sleazy. The material in this vulgar, obsolete and fickle film is so suggestive that ”outrageousness” is part of its sensationalist nature. To discover the unpredictable scenario of Carnival Story is to unveil a spectacle of turpitude, crass kitsch and hardened noxious passions; a revelatory act that makes us spectators of ignominious actions, each of which I unapologetically enjoyed. A smug production that prides itself on its toxicity and manipulative sexiness, taking it to inordinate and stupid proportions, yet it is a film that feeds on its overexposure of infamy, contributing to an energetic dependence on the scandalous, thus Carnival Story needs its vicious machismo and bombastic absurdity to be what it is. German director Kurt Neumann has the cheeky dishonor to pull off the melodramatic explosion of this curious but unstable film about the idiosyncratic relationships of an American carnival troupe trying their luck in a colorful Germany. A stunning Ann Baxter, plays an enticing local girl who ends up in the clutches of an unhealthy love, falls blindly in love with a vile, abusive and arrogant worker of that flamboyant American carnival, played by a loutish and domineering Steve Cochran. The calamitous narrative descends into the depths of the insubstantial, preferring the exploitative of its exuberant themes rather than the essentially rich in them. The subordinately explicit frontality in every minute of this drama reveals a story about the psychological frailties of a woman in a state of vulnerability in the face of the despotic fixation of a possessive and obstinate man. Carnival Story never loses its piquant aggressiveness, yet that has its sacrifices, the total annihilation of a productive, satisfying and fluid construction of a story that with the necessary measured levels would have been a quite singular piece of 1950’s fare. As an overall conclusion to the autopsy of its flaws, it is extraordinarily clear to me that this film would have done tremendously well to have been photographed in black and white; it’s not that the Agfacolor process is unsophisticated, it’s how obfuscated it looks to express a tragedy that is atmospherically so dark.