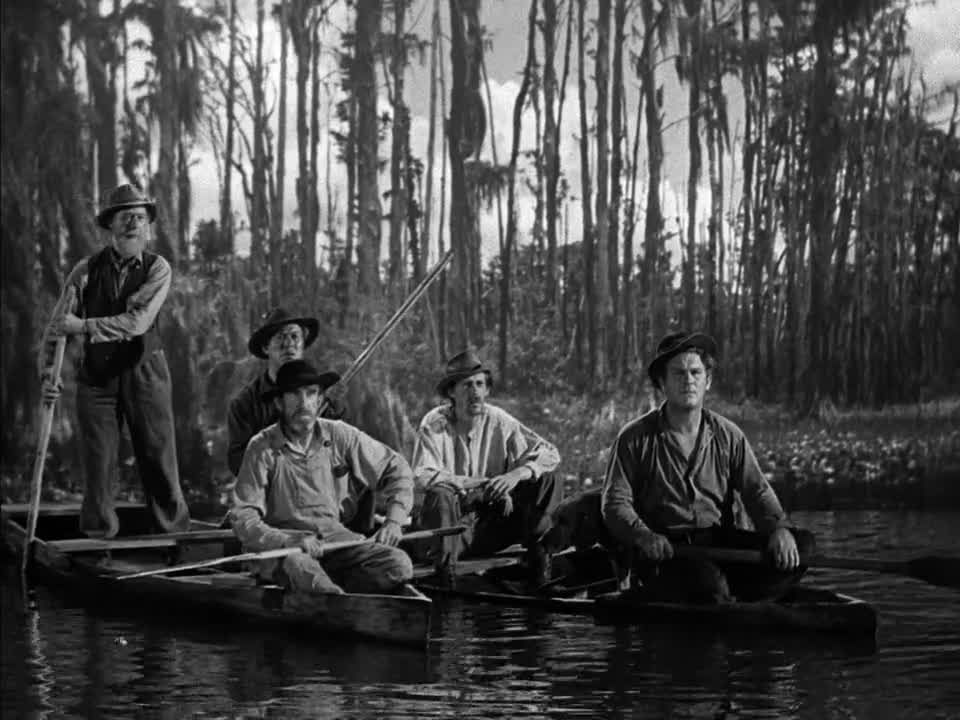 You can almost taste the discomfort and restraint that Jean Renoir’s immeasurable talent suffers from being subjected to work under the rigid and square systems of American cinema for the first time in his career, being a superlative auteur it was to be expected that his most volatile and inconsistent facet would be his period making films following the structural rules of Hollywood classicism. Some European filmmakers adapted phenomenally well, having prosperous results, and others simply not at all; the virtuoso French director Jean Renoir belongs to the second group.

Seeing that his country was occupied by Nazi Germany, the French auteur did not hesitate to immigrate to the United States as many of his contemporaries were also doing, although Renoir with many more reasons due to his broad and fervent sympathy with the popular front. His antithetical, radical and autarchic vision of filmmaking in his country totally clashes with the configuration and conception that the demanding Hollywood producers have with respect to cinema. Consequently, upon arriving on American soil, Jean Renoir had many problems finding projects that suited his idiosyncrasies. In parenthesis, if my historiographic data does not fail me, I would dare to say that the only young rebel doing what he wanted, and the only one who fulfilled absolutely all his whims (thank God!) in the glorious year of 1941, was Orson Welles. But let’s just say it wasn’t such a slow wait, maybe just relatively long, finally Renoir decides to direct this adaptation of the novel written by Vereen Bell, Swamp Water.

A rather bold decision I must say, the mysterious melodramatic essence of the narrative has nothing particularly Renoirian about it, yet I can somehow perceive what his purposes were and his dominant interest in exploring this story of perfidy, friendship and honorability. Swamp Water has neither a tragic nor a poetic denouement, it is paradigmatically optimistic, yet what precedes that positive ending is somewhat reminiscent of his facet in French naturalism. There is a pessimistic force not in its characters nor in the circumstances that take place in the plot but in the atmosphere that feeds on an enigmatic fatalism.

Shot almost entirely on location, the film benefits from sharp cinematography that makes the swampy settings look hostile and gloomy. This atmospheric formation invades the typical romanticism of an American narrative with its theatrical overtones and makes it look dark and moody. Those are some of the qualities that can be highlighted and discussed within the nature of the director’s auteurism. Outside of that, Swamp Water is fatiguing in all its thematic facets; the brittle narrative never allows equal time to expose the variety of actions that take place in the plot, many of which overlap in a filmic anarchy that Renoir cannot control. The disorganization does not strictly make it a bad film, but a very incongruous one aesthetically and narratively.

While hunting in the wetlands near the Okefenokee Swamp, the stubborn and adventurous Ben, his faithful dog, gets lost in the most inhospitable and unexplored areas of the swamp. Although his strict father warns him not to venture into these unknown and feared places in this small town, Ben, against his father’s wishes, ventures into the depths of the swamp to search for his dog. Once there, he crosses paths with a fugitive, arduously sought by the law, Tom Keefer, who apparently has been charged with the murder of a man. Ben has the opportunity to hear the other side of the story about the crime, and develops an affable friendship with Keefer, with whom he will be willing to hunt with him and thus make money and help Keefer’s daughter, who lives in unstable conditions and with a disheveled appearance.

The story composes a drama that seems to try to understand the interpersonal relationships in this community and how they react to the vicissitudes that occur. There is as much cyclical melodrama as there is riveting suspense, Jean Renoir manages to weave with these elements great moments of acting interaction, although they are simple and instantaneous, the conducting is memorable.

Swamp Water has a cast that any director of the time would envy, although not all are uniform or consistent in their dramaturgy, the professionalism outweighs the sometimes perceptible heterogeneity. A consistent Dana Andrews and an excellent Walter Brennan put at least some solidity to the faltering narrative, but the real standouts with modern stage presence are Walter Huston and Anne Baxter. Contradictorily to what Renoir’s cinema illustratively depicts, this film confidently shows that despite being a lyrical director devoted to a kinetic language and strongly visual expression, here he brings out terrific actor control, not on his preferred canvas but at least in something striking.

This review is probably giving the impression that I think it is a good film, after all I have specified more positives than negatives, but still, as much as my organic enthusiasm for this film is more optimistic, it is a film that annihilates the art of Renoir, a production that does not give oxygen to the auteur behind the cameras to do his wonders, and that is clearly reflected, giving a result that is too inconcrete and bland. Nevertheless, a flawed Jean Renoir film is still Renoir.