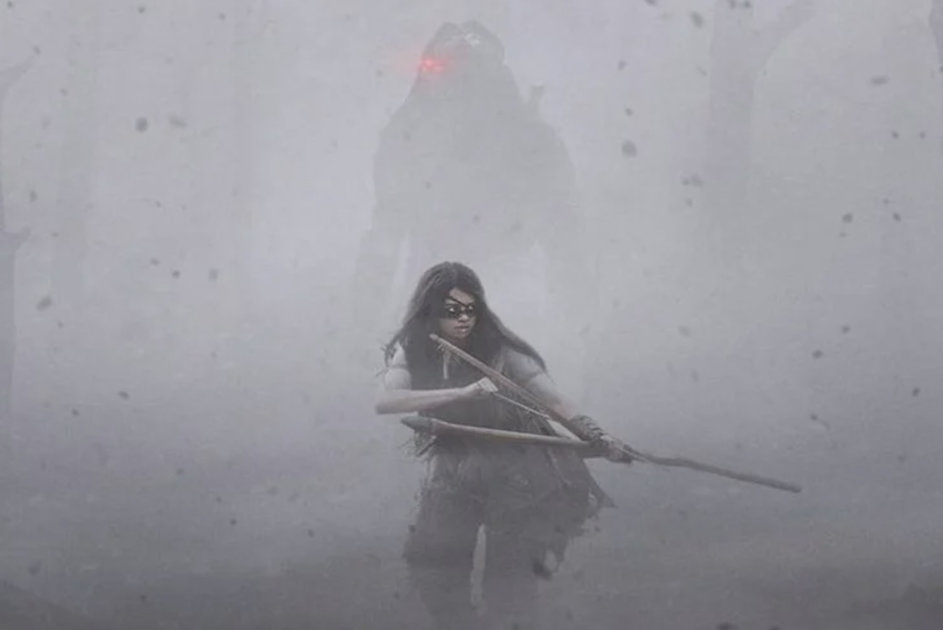 I think it’s already a majority consensus to affirm that this is the best Predator sequel/prequel since 1987, right?

Prototypical and cohesive of each of the functional and dysfunctional components contained in the best of the franchise as well as the worst of it. However, Prey is an exceptional case, as a film that joins the long ignominious list of films that should not have existed or productions impossible to justify, outside of monetary benefits, a sequel or prequel to a franchise famous enough to ”resurrect” it no matter how many horrendous failures have preceded it; Prey belongs to that endless list of films attempting to expand a beloved film franchise’s popularity precipitously, yet this is one of those extraordinary prequels that carries in its corpulent cinematic proceedings a transparently discernible identity, giving a new sovereign voice to misused clichés and establishing them in popcorn entertainment territory where a new menacing terror and formidable action can be nimbly crafted.

The particular crux of the muscular 1987 film Predator was the popular coalescence that emerged in the wild 80’s, an irresistible filmic formula: Part horror, part sci-fi, part action, all three articulated and dosed with high testosterone, without distinction. This new, fifth* film in the franchise boasts those compatible and essential elements with more dramatic, and even better developed I dare say, perspectives. It doesn’t reach the levels of gruff virility, let alone exhibit stentorian action with blistering unstoppable power, but it does observe its main character with fascinating diligence. By taking the bristling menace and stealthy peril of the 1987 film, Prey returns to the structural roots that made that film a robust ’80s cinema entertainment, and thus, it’s clear as day that this production has irremediable flaws, sacrifices that must be made for effective demagoguery. However, the copious flaws of following an already known pattern but with different approaches and textures, makes us immediately appreciate it with a modified perspective, at least that’s what happened to me. It is already fastidiously cumbersome to have to reuse conventions inherent to specific genres, and what this interesting production manages to do with it, is meritorious enough to define it as the best installment of the franchise since 1987.

In 1719, the intrepid and sagacious Naru, a young Comanche girl, struggles to prove to her tribe that she can be as skilled and strong a hunter as her brother. Although Naru is an intuitive woman and perceptive enough to sense impending tragedy lurking in her surroundings, she is also a rather impetuous young woman. As a result of her curiosity and her fierce desire to prove her bravery, she decides to go in search of the invisible mystery haunting in the lethal atmosphere. With sharp eyes and feminine power Amber Midthunder plays the main character, who is evidently the most lucid and fresh character ever written within the franchise. Interestingly, that is a salient and laudable detail for many reasons, the writing here prevails over the gimmickry  of a formal setting dense in three-dimensional modeling of wild animals and the grandeur of natural landscapes. The screenplay written by Patrick Aison based on the creative collaboration he had with this film’s director Dan Trachtenberg, has a compelling hierarchy; it knows with punctilious, millimetric timing how long each scene of great dramatic proliferation must last and when to rely on choreographed action to condense the gory entertainment. The narrative momentum is necessarily nourished by these dependencies, but their validity is irrefutable.

The voracious predator comes more wrathful and deadly than ever, flaunting its alien superiority and annihilating technology against the primitive weapons of the Comanche and the colonialists. Vicious and energetic set pieces are not lacking, though not always solidly continuous and each equally proficient, the nuances in the central performances in compositional action with the transmutability of a cinematography executed with environmental diversity and fast-changing visual directions makes it all fit together tightly and thrillingly.

When you watch Prey in the standardized conception of the genre you get the surprise that it’s actually nothing remarkable that it has departed entirely from its nature, but this production with humility and commitment is made to be seen for what it is, it does indeed have an intrinsic duality, yet it rarely hides it. There is a synonymity with all the other films in the franchise prior to this one, nevertheless this is the only one of the sequels that gives identity and unified articulation to the idiosyncratic and trite silliness. And encompassing these ideas, truth be told, you couldn’t ask for a better exhilarating and tense entertainment than this one.

*I’m not considering any of the Alien vs. Predator junk.