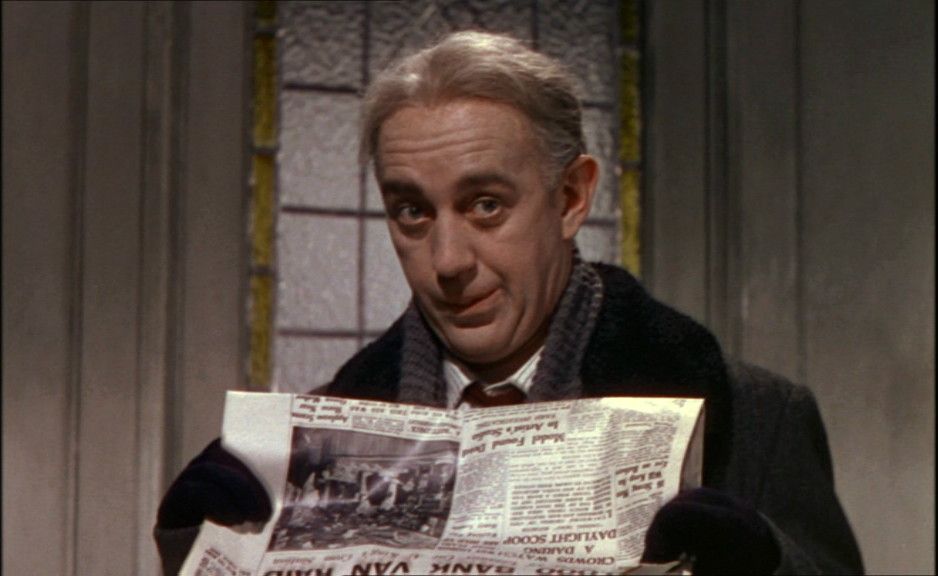 The Ladykillers (1955) Directed by Alexander Mackendrick

If there is an instructional manual on how dry, culturally significant British humor works in the art of storytelling, The Ladykillers is that filmic material most descriptive and emblematic of deadpan humorous language. Ealing Studios, best known for its post-war comedic productions, is the embodiment of Britishness, as an exporter of characteristics closely adhered to a specific culture. And for any non-British person, the films that came out of this film production company were like the tour guide to the peculiarities, idioms, and symbolism of British gestures that no other film could give you.

The wonderful classic British cinema has always had a design in its filmmaking system that could be confused with that of the Americans, formally undistracted, continuity editing, melodramatic ardor and acting pageantry at the apex of the hierarchy, yet its perspectives on life’s circumstances have a more singular flavor, more in keeping with a purely English experience, they have very distinct ethos. But never was the stereotypical appeal that had been formed as a perception from abroad exploited as in the searing productions of Ealing Studios. The Ladykillers is one of the many masterworks of British comedy, smashing the identity barriers of what we know as British wit and extending it to dynamic and adaptable extremes for universal laughter.

This macabre and sardonic comedy, wryly directed by Alexander Mackendrick, is a madcap story that subverts the paradigmatic focus of the heist narrative into a kind of nuanced  revenge fable that enriches the thematic versatility by playing with the audience as if it were a classic instrument of suspense.

Formidably, the patient writing involves us with a tensely interactive participation, which is primordial to understand the extraordinary functionality of its narrative gadgets; the film is muscular in innuendo, which incentivize the audience to resolve the acts before the characters take action, i.e. the adroit writing generates a sense of predictability as a system of hoax, only to give us an unforeseen slap in the face and something totally different from what we had well vivid and physicalized in mind happens. A device that hinders our thoughts and fiendishly rejoices when its impervious darkness ends up utterly dominating the situational in this scabrous comedy.

Cinema likes to pit wickedness against goodness, from adventure films to drama films, it is a constant and unerring formula. In The Ladykillers the equation is slightly altered, positioning even more unequivocal variables, such as having nothing less than kindness epitomized by one of the most tender and merciful old ladies in the history of cinema. Yes, clearly I am referring to the gracious and guileless Mrs. Louisa Wilberforce, played instinctively and with an extremely soft-spoken manner by Katie Johnson. The affability that emanates from the character of this lovely old lady, is immediate, and in counterpart to her human warmth we have 5 acid criminals taking advantage of the magnanimity of this meek elderly woman. That closes the perfect circle, not for the perfect robbery or for the flawless crime, but for unblemished revenge. Here the rampant power of karma is more severe than any callous  deeds of these infamous crooks; ironically and derisively, the hyper amiability of the character played by Johnson outweighs the outlandish villainy of these five delinquents, leading them to an uncertain territory with no way out.

A stupendous, toothy Alec Guinness, with a weathered vampire-like appearance, leads this criminal gang who plan a robbery, which involves the naive old lady without her knowing anything about it. Peter Sellers, Cecil Parker, Herbert Lom and Danny Green, all equally hard-nosed and obstreperous, are the other thieves who stay at the old woman’s tilted house posing as amateur musicians. The cadenced orchestration of the hypertrophic narrative jocularity is intricately distributed in each act with chronometric meticulousness, tempos following a pattern of implacable hilarity.

The riveting black humor of William Rose’s inimitable writing is not only in its surface amusement, but also in its clever figurativeness. One of the fervent fans of this film is the English filmmaker Terence Davies, and I find it essential to remark on his insightful reading of the subliminal elegance of the characters in this film; according to Davies the five miscreants are satirical interpretations of members of British society in an emphatic decadence and an atmosphere of failure. In depth, it is more than accurate that connotation in the writing, simple associations, but pungent and nourished by a cultural lexicon much deeper  than one might think.

Difficult to choose among so many proficient productions that came out of Ealing Studios to define which is the greatest representative opus of post-war British comedy, yet what remains reasonable to determine is that this is the most accessible, sublime, evergreen in resonant guffaws and supremely influential of the subversive British comedies.