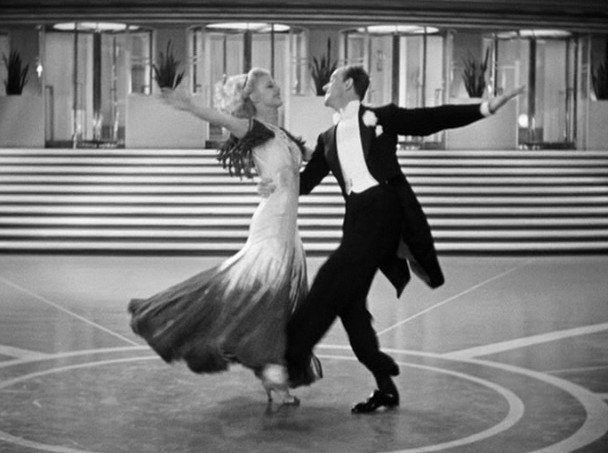 After the resounding and successful appearance of the whimsical dancing duo of Ginger Rogers and Fred Astaire in the flawed Flying Down To Rio (1933) it was more than a foregone conclusion that sooner or later the RKO production company that captured them in the same frame would bring them together again to squeeze the juice out of this dual talent, but this time in a film starring these two sensational artists. That prediction came true just a year after their first appearance in 1933, and the result was the revolutionary beginning of Hollywood’s favorite dancing couple of the 1930s, if not the best.

The Gay Divorcee is not the best musical feast showcasing this tremendous talent, nor is it the most optimal start to exploit the charm of this pair of actors, however it is an entertaining example that works more as a warm-up to what they would do in the years to come. Many of the wobbly erratic moments arise justifiably from the disorganized writing of a script that is subordinated by giving inaccurate timing to every star this film has; being the first attempt at exposure for this musical duo it is more than obvious that a production company as experienced as RKO would not risk 100 percent by making a script that is purely dominated by the energetic presence of Rogers and Astaire, thus giving considerable time to many of the comic reliefs in the film, which are unabashedly hilarious and brilliant.

The anxious, extremely animated and charming Edward Everett Horton is an essential piece to vitalize the jocularity, and likewise, the exasperating, cartoonish, and loquacious Erik Rhodes, both of whom have an equally important narrative involvement as the romance between the characters played by the magical duo of Roger and Astaire. That works up to certain scenes, unfortunately this film stretches out with much superfluity act after act leaving in cristal transparency what works and what definitely does not. The dissimilarity between the musical acts and the comic acts leaves a void and an inertia that demonstrates the incompatibility of a wrong hierarchy in a script that should have taken more risks; yet those invariabilities are passable for what was said before, it is the first bet that is made for these two extraordinary actors, and it is clearly a training to what would come later with perfect creativity.

Guy Holden, a famous American dancer, is traveling in Europe with his friend and lawyer Egbert. On his way to England, an incident at French customs brings him to meet Mimi Glossop, who is traveling with her aunt. In London he meets her again by chance. Guy falls deeply in love with Mimi, unaware that she is a married woman, in the process of divorce, whose formalities are being handled by Egbert himself. Guy, Egbert, Mimi and his aunt will meet again in a hotel on the coast where a series of misunderstandings will occur.

The inequality between the palpable dynamism of the masterful musical choreography and the implausible comic and romantic sequences is notorious, but it is not a pronounced defect that directly affects what matters most in this film, and that is to see in absolute gloriousness the two protagonists interact in dance and singing. Astaire and Rogers don’t dance, they fly to the music, and swing with an acrobatic ease that defies the laws of gravity.  The comic smoothness between the two is just as stylish and exhilarating on the dance floor as it is in the non-musical romance; visibly it may seem that the film is more of a typical collection of cinematic forms from the American comedy cinema of the 1930’s, it may be very idiosyncratic and may be redundant with its conventional montages, but that grouping of theatrical vignettes that closely resembles the comic sequences of the Marx Brothers, never lose the sense of experimentation with the talents of the two lead stars.

A flawed form of filmmaking no doubt about that, but believe me, the portentous musical numbers amidst the roaming comedy are as unforgettable as they are reverberating with beauty, explosive merriment, and choreographic sumptuousness. The Gay Divorcee is just a warm-up, an anticipation of the impeccable productions that would follow. Even Mark Sandrich’s muddled direction gives the impression that it is a rehearsal of sorts, he is just getting to know the sparkling voluptuousness of the scenic power of these two great actors. But I repeat, as much as this film does not express the exciting optimism that would be seen later, it has enough grace and life to treasure it as a wondrous beginning.