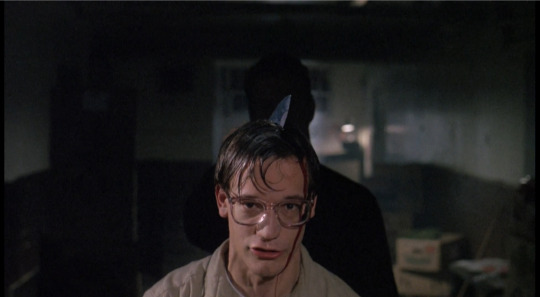 Bad but enticing, trashy and delicious, dim-witted yet amusing, and the succession of heterogeneous descriptions of this ostensibly lousy film could come up with a myriad of definitions that stun my perception of this slasher farce even more.

From its generic and straightforward name to the amateurish performances, all signs point to this being one of the many exploitative productions of the 1980s, during the anni mirabiles of Americanized gialli. It transparently bears the standard label of those narratives that expanded in a copious and rampant way post-Halloween (1978), perhaps by 1989 its label already has an expiration date and it arrived too late to at least categorize its miniature charms in a superior level, however the hyperbolic paradigmatic concatenation of the genre exposes them with an effusive gusto that ends up convincing me of its pragmatic bloody hilarity. Nevertheless, as magnetic as the concentrated entertainment is in the intrinsic of its flaws, the first film by the neophyte director and longtime friend of Sam Raimi, is too presumptuous; even in its astronomically unquantifiable proportions of tomfoolery, the impromptu comedy in intersection with explicit butchery never comes into adequate rapport.

Intruder carries in its guise the visual frenzy of a first-time director, Scott Spiegel keeps nothing up his sleeves and galvanizes his film with irremissible camera angles and an exorbitant syntactical disorganization that makes a feast of incongruities into something farcical to watch.

For a horror film with these characteristics, the set of absurdities may even look very sophomoric, yet just because the cheap and far-fetched execution is over-the-top and catastrophic does not mean that the raw material of this slasher does not do its job, this gory film has untamed set pieces that hold nothing for the imagination. The film euphorically enjoys the use of its interesting location for this hyper violent scenario, it’s a slasher inside a supermarket, nothing more, nothing less.

It narrates the most quotidian synopsis you can imagine, within the slasher concept of course, and locks us in with stereotypical characters with a killer on the loose in an everyday supermarket. You will be surprised to discover how the mischievousness and dynamism with which this location is used, accentuates the cinematic intensity of an admittedly ordinary plot, and the nonsensical performances, just as bad as the material they’re working with, perpetually sustain the film’s exaggeration with the director’s own vibes. Elizabeth Cox playing the typical beautiful blonde girl along with David Byrnes and brothers Sam and Ted Raimi are some of the victims trapped in this supermarket of terror, and a subtle but recognizable Bruce Campbell makes a superfluous cameo at the end.