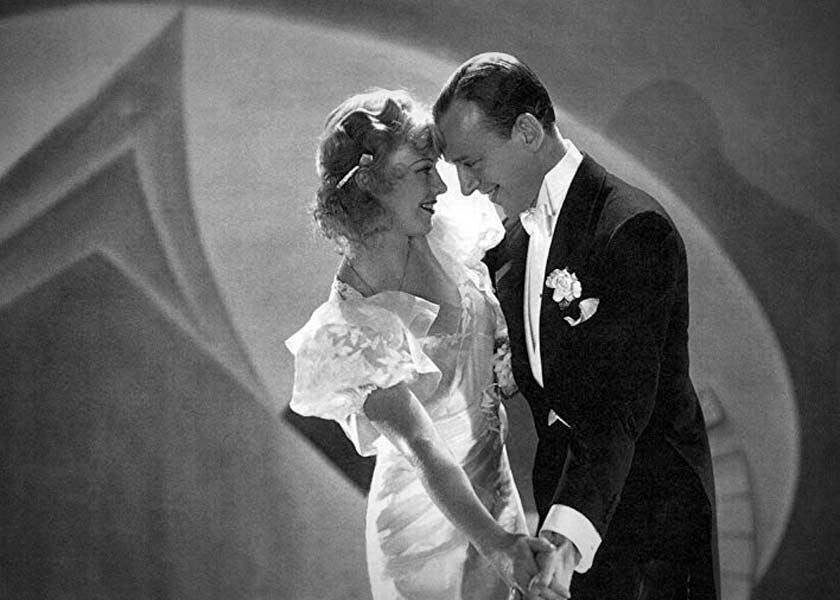 Flying Down to Rio (1933) Directed by Thornton Freeland

Undeniably charming and musically exhilarating, its escapist aims are nevertheless too spectacular, too extraordinary in sequential extravagance to the point of making it impossible to conceive an optimally compact plot. Enthusiastically this 1933 musical film tries to do too much in too little time and hopelessly puts its priorities on pageantry while forgetting the comic essence of its endearing but flawed script. Flying Down To Rio is elementally everything you ask for from a classic 30’s musical, it’s even paradigmatic, it’s the film that in providing glossy superficial entertainment does everything hilariously well but when it comes to giving the same qualitative cheerfulness and elegance to the brittle plot it does everything flatly wrong.

This production is more historically important than filmically timeless in its entirety, for the books of film history it is the primordial event that would capture the tonic harmony of the heavenly dancing duo of Ginger Rogers and Fred Astaire on celluloid, and would later be the reason, the exact origin of the monumental success of all the films that made everlasting stars out of this sensational duo.

The RKO film production company has always had a singular ability to create projects that become immediate commercial successes, but beyond having the proficient excellence of being one of the major studios and one of the most productive in making box-office dominant films, it is the production company that served as a vehicle to launch many artists to stardom. The beguiling, exotic and aristocratic Dolores del Rio was by no means unknown in the film world in the 1930’s, she had performed in enough silent productions to make a name for herself in the industry, and despite being exuberantly stunning in this faulty musical, the only known in the vaudeville and broadway world Fred Astaire and Ginger Rogers steal the majority of the scenes. And my intuition tells me that the filmmakers realized this in the midst of filming, squeezing the thick script even tighter to stretch out a few more minutes and take advantage of the inimitable charisma of these two wildly creative performers, though that’s just my hypothesis.

Roger (Gene Raymond), a handsome and flirtatious American musician, falls in love with the beauty of Belinha De Rezende (Dolores del Rio), a beautiful Brazilian aristocrat. But Belinha must return to Brazil to marry a man just to save her father. Roger, accompanied by his band, led by Fred (Fred Astaire) and Honey (Ginger Rogers), must travel to Brazil to prevent the marriage.

Flying Down To Rio suffers from a surplus of spectacle, a vibrant excess of festive cheer, an energy that is unapologetically enjoyable; yet for all its indulgent filmic escapism, it is still seen for what it is, a film with a plot wrapped in musical sequences and an incandescent pre-code nature. That is, as much as one would like the film to be just stilted musical choreography, the plot is always there to interrupt not only with catatonic moments and implausible romance but with unnecessary subplots that undermine the artistic value of its melodious display.

The always resplendent Gene Raymond stars in this film along with the exorbitant beauty of Dolores del Rio, it may seem at first glance that much of the drama’s tremendous architectural imbalance stems from the poor chemistry between these two actors, playing the archetypal 1930’s comedy film couple; however I feel that both actors play the role they are given with graceful passion, the flaws don’t come from them per se, they come from the inaccurate material they have to work with. The pre-production material is so disorganized that it is reflected in the precarious structure of the narrative in this film, it is as if they want to have time for absolutely everything, they want to establish a comic romance, and on the other hand they want to orchestrate a gigantic party, but there is never the intention of doing both in a uniform unification.