Skip to content (Press Enter)
Home2020'sEverything Everywhere All at Once (2022) 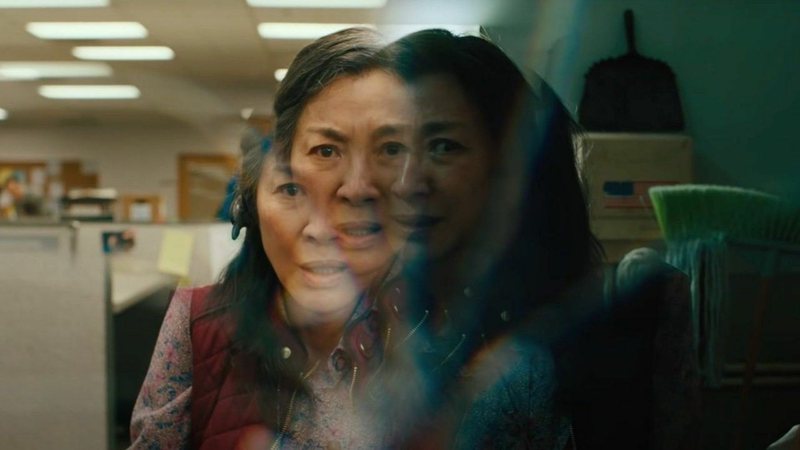 How to write about a film that has had an overwhelmingly positive response from both audiences and critics? This will be the great irony as the starting point of this writing, since as you will understand…I find myself on the minority side that really hates this overrated movie.

Everything Everywhere All at Once is an over-stimulated exercise in raucous entertainment and chaotic humor, just as its title aptly describes, its flaws are also everywhere at once. This hyperbolically creative film works as if its ideas, desires and emotions come from the mind of an overexcited teenager who has consumed too much anime. It’s boisterously everything a feverish anime enthusiast would want in a non-animated film. Oddly enough, my biggest and most irritating problem doesn’t exactly originate in that vitality of juvenile emotions, but in how they are materialized with thunderous dynamism, which never stops and never gives breathing room.

Apparently the drawbacks I have with this colorful production are purely my own whim, or perhaps a matter of taste, yet I don’t think I was the only one who noticed how banal and manipulative this film is. Everything Everywhere All at Once is indulgent cinema, popcorn cinema to pamper its audience and give them so many sugary moments that one can effortlessly fall for its cloying enchantments. It’s very easy to discern the good from the bad in such a superficially innovative but deeply hackneyed film; primarily because of how mechanical it is emotionally and…emotionally. Admittedly, it’s a script that over-relies on its affable message or modern parable, hence emotional omnipresence ends up being the only formula of rhetoric this bouncy production has to persuade an audience that feeds on cinematic populism.

If I am to describe this film tonally, visually, narratively and holistically it would be more objective to say, eliminating any subjectivity, that it is a formally active yet inert work in productive meanings. The dual direction of Dan Kwan and Daniel Scheinert is purposeful and fundamentally compelling, although only up to a point. Both cohere their ideas with the most extraordinary hyperactive demeanor I’ve seen in contemporary cinema, yet they are the pointed reason why this film feels jarringly lethargic even with so much simultaneous mobility. Using a continuity that fragments into discontinuity is a paradox that the screenplay opts for and makes it an absolute as a method of storytelling; pretentiously the narrative moves forward at breakneck pace without paying attention to the themes that are subtly established in its zany plot. That flagrant error is what makes it robotic and mushy on the surface. By having a scheme that arbitrarily prioritizes accelerating drama along with incendiary action, it inevitably sacrifices much of the thematic gravitas.

Everything Everywhere All at Once is an ambitious film, its capacious personality pretends to go to the cartoonish limits of cinema and similarly tries to structure its narrative extremes in the unfettered functions that cinematic three-dimensionality can give us.

Now that I ponder about it with greater concentration, I think this film is more interesting when you theorize it than when you see it. Be that as it may, ambition in the spectrum of cinema can err on the side of being too presumptuous, and they blatantly overstepped the boundaries but failed to give a check to those artistic urges. The plot is unruly, that’s visible from the start; it’s meant to establish a whimsical family drama first, in which we quickly notice what the normative pattern is.

A Chinese-American family runs a laundromat that has multiple administrative difficulties but mainly the source of the problems are financial, as they owe exorbitant taxes that they must pay at the end of the day to avoid the terrible consequences of a foreclosure, a subliminal bureaucratic nightmare. Being a plot that gravitates to a socioculturally mixed family makes the empathy we feel for them practically automatic, even the intrinsic clichés become hilariously diverting. Something immediate happens though, and that is that the imperious transition from act to act magnifies a disorienting syntactical disarray that drives me to alienate my interest in what I’m watching. Ontologically it loses its meaning, unwittingly eliminating its primary nature, which was a drama with tinges of black humor that has at its core to specify day-to-day themes of human sentiments, such as love, kindness and forgiveness.

The confused, forthright and troubled Evelyn Quan Wang is the protagonist of this film, and the character who lives this energetic journey through the multiverse. This captivating character is played with magical passion by Michelle Yeoh, who makes the investment in this grueling road trip worthwhile and momentarily satisfying. This character represents the most humanistic side of the film but also the most absurdist. Her life consumed by giving all her effort to raise a family with principles and an integrity based on work commitment, turned her into a woman who never meditated on whether she really wanted to be that prototype of traditional woman. Not only did she abandon her most cherished dreams, she similarly neglected herself, her essence as a person outside the family. That element invigorates the drama amidst all the scatterbrained action, but its redundancy soon takes the narrative into very campy territory. The mother quarreling with her daughter, the daughter living at odds with her mother, is the cheapest discursive method that coming-of-age cinema perpetually presents in its narratives; here it never ceases to be stultifying and vulgarly self-evident.

I’m most likely the anti-thesis of this film, especially in its stolid, slapstick humor. The mundane writing wants to articulate jokes that range from the distasteful to the innocuous, utterly ineffectual and frantic to incomprehensible levels. The outlandish comedy is what pronouncedly clashes with the drama and the exacerbated action; this production pretends to orchestrate sequences where we have an intimidating yet comical Jamie Lee Curtis acting wildly and at the same time we have acts of shoddy emotionalism. I repeat, this film obsessively wants to live up to its title, it wants to do everything at the same time, literally. Therefore, the erroneous way of synchronizing the plurality of genres and the extensive concatenation of idiocies, falls into an act that I like to call “cinematic suicide”.

The film wants to do more than it can do, and hypertrophies its philosophical questions as if it were an ingenious narrative; it is decisively nouveau, replete with a garrulous adolescent imagination, that is not in dispute, nevertheless innovative does not necessarily mean shrewdness. The teleological questions that trouble us most in life are metaphorically embodied in this fantasy and in its multifarious universes, yet the far-fetched and fanciful interpretation breaks the barriers of coherence by doing the opposite, we end up not in the unfathomable as the natural questions of life, but in the obvious.

Structuring this film must have been a headache, and it’s a shame that so many hours were spent in the editing room putting together this puzzle that at the end of the story it doesn’t feel like one, it feels like a maelstrom of insubstantial shapes that have nothing, absolutely nothing, to tell us. The execution, as arduous and complex as it may be, subtly falters in its outrageous digital transitions and cross-cuts that energize the plot but hinder the development; likewise the digital design of the movements, specifically of the camera, are as synthetic as a video game that denaturalizes the photographic image.

Everything Everywhere All at Once boils down to insipidity, it’s contemporary cinema at its most ponderous. Nice try, but failed.