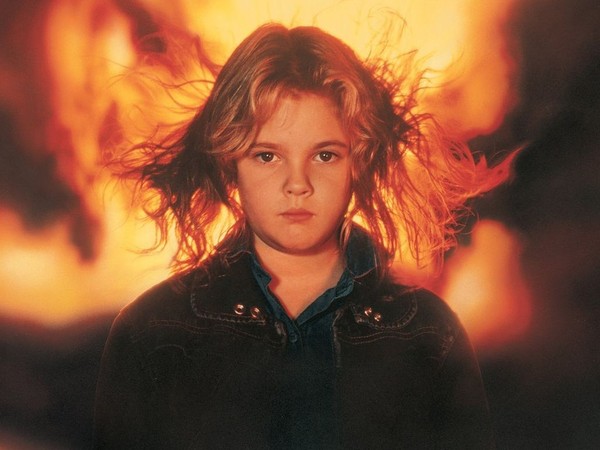 Throughout the history of cinema we have made the terrible mistake of assuming that any literary novel is adaptable to the medium. And this opaque, ineffectual and flawed production that adapts one of Stephen King’s most famous novels to the big screen is no exception. Firestarter is a deluded product of the 80’s that capitalizes on the successful peak of the exaggerated number of Stephen King film adaptations, it is more than an objective argument to define its existence.

This failed production of 1984 was conceived for the right reasons but was carried out for the wrong ones; the extraordinary imagination of prolific writer Stephen King can sometimes, in my opinion, fall tiresome and obtuse. There are myriad reasons for this debacle of a film, but I believe decisively that the gigantic flaws stem from the cinematic incompatibility with the engaging novelistic hodgepodge contained in this supernatural horror and sci-fi tinged drama. This film does not have a key starting point to develop the thematic proliferation that extends into the drama, that “key starting point” is a referential way of naming the essential core that every great story should have. To simplify that theory, it’s like saying that in general the film doesn’t have a clear idea of what it wants to be. The in medias res storytelling is extremely basic but dynamic in its eighties mystery essence, and it starts with enough sense of entertainment, however, as that fast-paced first act transitions to the following ones, it is impossible not to notice how the film deteriorates with its discordant trivialities.

Not only does the wild amount of genres interacting with each other feel spasmodically jarring, but none of them end up amalgamating as they should. Consequently, director Mark L. Lester fails to discern between sincere and contrived emotions, and with soporific direction he focuses all his effort on the superficiality of the emotions. It is a grueling journey from a family drama to a conspiratorial thriller that pretends to express multiple allusions that unintentionally stall in the diffuse.

How did a cast of this quality end up in a production of these characteristics?

That simply cannot be answered, and will remain one of the great mysteries of 80’s cinema. Emphatically, I find myself unable to answer that tortuous question, because honestly, a quick perusal of the general idea of a pre-production of this nature sounds phenomenally good. I think anyone could have fallen into the naivety of having faith in a production like this. But hey, we’ve all been proven wrong. The sweet and spontaneous Drew Barrymore at just her precocious 8 years of age demonstrates an enormous capacity for dramatic insight, her stage presence is instrumental in at least giving the film microscopic seconds of solidity. It may seem like an idiosyncratically hammy performance, yet little Barrymore delivers vivid moments and compelling emotions when the narrative needs it most. A villainous and chilling George C. Scott also does his thing alongside an ambitious Martin Sheen, both playing two corrupt and Machiavellian characters bringing intense personality in unison to this film.

The performances definitely do what they can with the flimsy material they are given, turning the empty calories of the filmic ingredients into something more nutritious.

To write about Firestarter is to be forced to remember that it is filmed with an amateurish splendor that leaves me somewhere in the middle, leaves me undecided, leaves me vague as to whether its hideous cinematic physiognomy is ironically brilliant or just plain crappy. The structural work of the visuals are invasive in ugliness and sophomoric, but I’m not going to lie that watching such a level of incompetence didn’t amuse me. It’s composed with an exacerbated amount of wide shots filmed with wide-angle lenses, which I can easily intuit what they were trying to achieve with those anamorphic shots, yet the formless and useless staging prevents formalizing those expansive intentions. As one might expect from such a disorganized execution, what is shown in the two-dimensional framing is as fragile as crystal and makes the compositional imbalance of the entire cinematographic work exaggeratedly visible.

The formal scheme has an interesting strategy that is lamentably lost almost immediately; much of those broad features are intended to exalt the psychic abilities of the characters, especially the girl, who has the ability of pyrokinesis to be able to respond with fire to her most choleric emotions. The protagonist’s ethereal power is too cliché for a decade like the 1980s, too Carrie-esque (oddly enough, another Stephen King novel), but that doesn’t mean it ceases to be a vital element of this film’s entertainment. Flagrantly we witness what it so insistently wants to achieve with such visual pastiche, but insufferably fails because of the opposite polarity between the tenuous visual execution and what manifests in the drama.

As a minimalist summary of this stolid production, we could come to the consensus that it is a disharmonious film by nature. There is absolutely nothing that smoothly unifies the exploitative and indiscriminate amount of genres, which on the one hand wants to give dramatic productivity and on the other hand wants to do the opposite. There is no synthesis that reaches a narrative agreement, there is only an amorphous result that says nothing substantial. And how can we forget that Firestarter is the owner of one of the most bizarre soundtracks that Tangerine Dream has ever orchestrated, a delirious music that would have worked with supreme force in any other film… except this one.