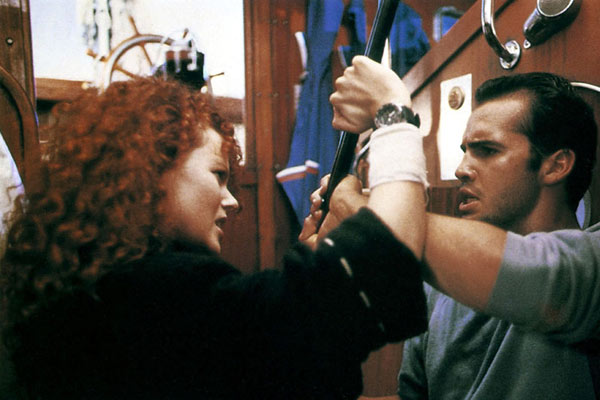 This airtight, suffocating maritime nightmare resolves a risky narrative scheme with superficially clichéd formulas but with a dense atmosphere frigidly calculated to establish a nerve-shredding thriller that inadvertently assaults you with its imposing and genuine themes. Dead Calm is duplicitous, like its ominous but stealthy title the appearance of this concentrated suspense is subtle and immersive.

The natural force of this film lives as a parasite well hidden in the recesses of human beings’ most invasive dreads, and as it feeds on those unsettling fears, the narrative momentum aggressively opens the doors to a plot with transmutative meanings. A content that comes from the intelligent 1963 novel written by Charles F. Williams, but it is worth noting that the skillful script of this film takes ample liberties to manipulate the story and make some substantial changes, elements that effectively end up being better suited to the cinematic apparatus. At first glance it may seem like pure cheap technicality, and similarly the narrative contrivances may be very directionally obvious, however, despite being entertainingly demagogic filmmaking, the intense and claustrophobic vision materialized by this powerful production seems to tell us more than just a thriller. Mostly, the thematic factors are so sharp and compelling that they vanish any lightweight or erratic moments in the execution, and much of the enormous satisfaction of watching this cautionary thriller comes from that inexhaustibly multifaceted interpretation it has in its cinematic dimensions.

After the death of their baby in a car accident, John Ingram (Sam Neill) and his young wife Rae (Nicole Kidman) are on their sailing yacht at sea, far from any coastline. They have taken up the sails and are enjoying the calm, fine weather. Some distance away they spot a strange looking boat, and see a small boat with a man approaching their yacht. The man explains that there has been a serious accident on the boat, that it is sinking and he is the only survivor. John has doubts and decides to personally go to the boat to find out what the reality is. Once he has left, the man on the boat takes control of the yacht and sails away. In the meantime John is trapped on the sinking ship.

Dead Calm uses simple methods, but develops them complexly; from its depressive and immediate beginning it forms a compact energy of bad luck that does nothing more than tell us indiscreetly that act after act the silent and quasi-fantasmagoric atmosphere will create misfortunes that relentlessly take place as if it were an evocative premonition.

A phenomenal Sam Neill and a devastatingly brilliant Nicole Kidman play a couple trying to overcome the sad tragedy of an accident; Phillip Noyce’s tenacious direction takes that asphyxiating, grief-stricken crisis as an efficacious ingredient to schematize the themes and erect a thriller with erotic overtones. The terrifying combination is perfect, even more so when an agile, hyperactive and psychotic Billy Zane is introduced into the plot, in one of the most delirious and fascinating performances of his career. Billy Zane turns this thriller into an exaggerated but staggering psychosexual suspense, which converts the tenebrous calm of the beginning into a paroxysm of paranoia and repressed sensations. Zane plays a peculiar character, a mysterious maniac who flaunts his sweaty body and has an itinerant energy, when he is aggressive he is demented and lethal but quickly his personality changes in moments, a chilling and engaging bipolarity.

The narrative structure is deliberately nervous to imbue notorious inescapable emotions that subject us to the sensation of being in the vastness of the ocean and at the same time in the anguished and vertiginous sensation of being trapped in a place from which to flee would mean your death, that is, a boat in the middle of thousands of miles of sea. The double personality that this film plays with is so intriguing, that the thematic effects create a sense of superlative storytelling; we naturally create a figurative comparison between the initial tragedy with the upcoming events as a traumatic response to a pain not overcome. Nicole Kidman’s poised performance suggests the intensity of that suffering, and the savage, hostile stranger she accidentally meets at sea seems to symbolically attack and defy the stress left by the grievous tragedy.

There are usually two types of modern thrillers, those that have well-founded, knowing clichés and are horrendously shot, or those that have dull, extremely predictable mechanics but are masterfully shot; this slick 1989 thriller arguably manages to be a solidification of those categories. It is creatively shot with cinematography that loves to highlight the massiveness of the natural environment and the enclosure of the nautical environment. At ephemeral moments it enters a state of desperate predictability, and at others it is exquisitely unpredictable. And it’s smartly edited, with some of the most competent cross-cutting I’ve seen in 80s cinema. Dead Calm with piercing fury manages to do what a thriller of this nature rarely manages to accomplish.