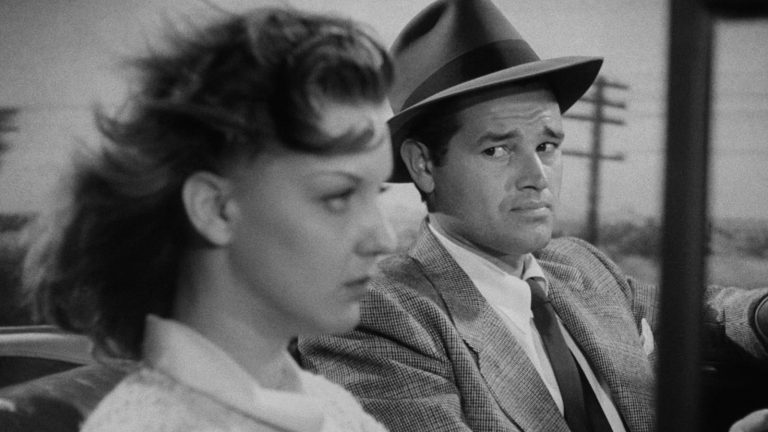 D.W. Griffith said “all you need to make a movie is a girl and a gun”, that aphorism was quoted again by none other than Jean-Luc Godard. This micro-budgeted noir confirms what he said but makes a few minor tweaks to the scheme, Detour doesn’t need a gun, it’s one of the few American noirs where not even a single gun appears in a frame, but it still has the essential ingredient to be able to make that quote work: the girl, and not just any girl. “All you need to make a movie is a girl and a car”, at least that’s what this movie tells us, and it’s reaffirmed by this lean noir that does nothing but tear you apart with fierce dialogue, and one hell of a lot of bad luck. The simple structure of the script works not because of its in medias res beginning or its B-movie allure, it works solidly because of the unsparing decision to create a Machiavellian story whose only narrative core is to demolish emotionally, psychologically and physically a single character, here there is not a shred of luck, the coincidences are so cruel that it seems that the world has conspired against the main character.

If the master of European aesthetics Edgar G. Ulmer was well known for something, it was for squeezing all the juice out of low-budget productions, he was a director who was not afraid to sacrifice narrative and spatial logic in the editing in order to achieve in a short time to condense a film with unsophisticated scripts that clearly demanded more minutes. And indeed, his skill and concentrated proficiency as a filmmaker lends an exceptional language to this cold film, translating the crude minimalism of the lean structure of the narrative into something so iconically and sensually lethal that at times the seriousness of the context and the starkness of the draconian excesses alienate the silly artificialism inherent in its design into something naturalistic and lusciously perfidious. It is a kind of tragic poetry that gives no oxygen for sympathy or for superficial beauty, its verses are impenetrably dark and we, seeing them materialized in such a continuity of misfortunes, can only savor and enjoy their wickedness, they are very sharp rhymes yet stupendously cinematographic.

There is no minute, no frame, no sequence in this film that I would remove, I wouldn’t even change the errors in the spatial coherence of the cuts, nor would I change the obvious flailing rear-screen projections, everything fits in its own imperfection to establish the rampant nihilism that devours this artificial set design, which engenders emotions that range from the morally intricate to the terrifyingly absurdist of life. Putting the context of the year in which it was released, it is even clearer than water that post-war pessimism was already influencing the film medium. Only about two months after the end of World War II this film was released, and it is unmistakably saturated with the paradigmatic defeatism and negative vibes that would become unrestrained in the noirs of the following years; if the impact that WWII had on cinema has taught us anything, it is that yes, the despicable Nazis lost the war, yet lamentably we all as a human species also lost…

That brutal despair manifests itself in actions that Detour understands perfectly, the collision between the main character’s psychology and the tragic misfortunes he encounters, opens the doors to a narrative that emphasizes non-diegetic thoughts, the typical and infallible narration of the main character, who not only tells you the dramatic entanglements of the events, but also what he thinks of them.

The life of Al Roberts, a pianist from New York, becomes a nightmare when he decides to hitchhike to find his girlfriend who lives in Los Angeles. What Roberts can’t imagine is that his journey will become twisted in a series of problematic events that will end up dragging him to a limit situation. That’s how compact the plot is and that’s how short I’d like to keep it, with no specifics and no extra details to detract from the unembellished narrative of this film. Let’s say that this uncomplicated synopsis is a way of reflecting the thinness of this film; it is a way of allegorizing its exceedingly laconic duration.

It is as if the film itself confronts the protagonist’s desires as a morbid mockery, the framework has a certain destiny for the character, but he is given certain details that could grant him redemption, however none of that happens; his destiny is a cosmic void in which he can only expect the worst. That continuity of miserable punishment, connects not externally but internally the cheap plot and the riotous way of filmmaking in a fast-paced 68 compendious minutes that leave no room for air. In the lyrical and proto-noir cinema of French realism in the 1930s, it was customary to have characters who despite their desires for liberté, and socialist hopes, the consequences perpetually veered towards fatalism regardless of idealism as the spirit of the plot; the dense influence of that aesthetic yet deeply deterministic beauty is practically ubiquitous in post-war noir narratives.

The pianist, and hopelessly in love, Al Roberts, played intensely by Tom Neal, is the victim and the punching bag of this story, many of the characteristics given to him are profoundly similar to the poetic characters of French realism, his romantic ideals, and his energy is so harmlessly clean, that we take them as an imminent danger, and aggressively that prophetic peril ends up vaporizing those symbolic aspirations. As I specified, the essentiality of this film lies in its female character, the rapacious, psychologically masochistic, and obsessive Vera, played with wrathful passion and psychotic intransigence by Ann Savage, living up to her artistic surname. She is one of my favorite archetypes when it comes to defining femme fatale, the only lethal girl capable of taking you to hell with her. Detour is tenaciously nasty and makes you experience a knock out of bad luck during its microscopic minutes, and it’s a masterwork conceived by the king of poverty row, the cheap cinema maven PRC (Producers Releasing Corporation)

Detour is one of my favorite noirs, and it’s the film I recommend to anyone who thinks they’ve had a luckless day; trust me, there’s no such thing as bad luck as in this barbarous film.